This is Fred, owned by Walter & Iva Barbee.
He is the “red” or “yellow” version of the breed.

An All around Dog,

The breed was developed for just that purpose, to be a perfect all around dog.  Blue Lacy’s know where to be at just the right time, driving into task with out the hesitation of fear.  That was very important to the needs of Colonial Americans in the 1800’s.  Especially for my great great, grandfather Frank Lacy and his brothers George, Edwin and Harry who raised several hundred head of cattle and hogs, with no help from modern age farm equipment.  The four brothers didn’t just need help with rounding and driving livestock, but also with hunting food and hides for their families.  Their dogs were said to replace the work of a cowboy by five times during the day, and the rest of the time they would tree coon’s, hunt wild hogs and find wounded deer on the slightest of blood trail.

The “Lacy Brothers” arrived by covered wagon in 1858 to the granite hills near Marble Falls, Texas from Christian Count, Kentucky.  They originated the breed shortly after they settled in Texas.  The brothers made sure that every dog they bred were quality working Lacy’s.  They took the same pride in breeding their dogs as they did with breeding their livestock.

Frank, George, Edwin and Harry were not just occupied with livestock and dogs.  These men were soldiers in the Confederate Army and had many other accomplishments in their country and community.  There is a write up at the capital of Texas, in Austin about George Lacy.  It states how he both granite hill, known to be Granite Mountain now, and donated all the needed granite to build the capita.  The capital has been built out of wood in previous times and there had been problems with it burning down.  The state gave him and apartment in the capital for the generous donation.  He later donated it to the Daughters of the Republic and now is the home of the Lieutenant Governor, according to Granville Lacy (George Lacy’s grandson). Granville shared with my husband and I what made these dogs different from other herding dogs.  He talked about other dogs and how they work the back end of the animal, but a Lacy works the nose. They lead the animals not push it.  We had an opportunity to witness this for ourselves.  We use our Blue Lacy’s for finding wounded deer and treeing coons and had not witnessed these dogs on cattle.  It was extremely fascinating to see the Blue Lacy dogs keep the cattle in such control.  The Trappers I have talked to say they do the same with wild hogs.  It is truly a sight to see!

Clyde Lacy (cousin to Granville) passed down a story about his grandpa Lacy and his Blue Lacy dogs.  He recalled that they would have approximately 300 hogs held up on Granite Mountain.  When it was time for the hogs to be penned, Grandpa Lacy would open the gates and give the dogs the signal to round them up and put them in the pens.  With out aid of the cowboys the Blue Lacy’s would bring back the herd in roughly 3 hours and have them in the pen.  These incredible instincts are what made them known back in the time of the Lacy brothers and spread them through out the counties.  They are as true a Texas pioneer as the men you see in history books.

When the three-wheeled horse hit the trail, it brought this unique breed unsuccessfully close to extinction.  While the need for its instinctive herding abilities were diminishing the need for its abilities to bay the fiercest of hog, pick up the trial of any game animal or find wounded animals was on the rise in the commercial hunting industry.  They are now the most common breeds used by the United States Trappers.  The Lacy Game Dog Registry is working to increase the number of Blue Lacy’s back to what it once was.

My family history suggested that Blue Lacy’s are the result of Greyhound/ sent hound/ coyote cross with the emphasis on the herding/ droving characteristics.  They have been categorized with the Cur breeds and listed in the herding group.  Like in every breed of dogs, the different combination of dogs used to develop one breed is theory, and may people have their opinions.  The only proven fact is, all dogs are descendants of the coyote, dingo, fox, jackal or wolf.  Looking up dogs in any encyclopedia can support this fact.

If you are wondering, what do these dogs look like? I was just getting to that! A pure Blue Lacy is 25-50 lbs. And approximately 18-25 inches in height.  Their coats are smooth, short, and tight and exceptionally clean in appearance.  The light gun-metal gray to almost black Lacy’s are classified as blue in color.  Red, yellow to cream Lacy’s are classified as red in color.  Finally, yet importantly you have Tri-colored Lacy’s.  They have a combination of Blue and red markings.  All pure Blue Lacy’s have minimal to full white markings on their brisket.  White is also common on a paw or paws.  All three of the different classified colored dogs are still called Blue Lacy’s.  Both the red and tri-colored Lacy’s hold the name due to the blue-color gene they possess and produce.  Their eyes are very bright and distinctive orange to amber in color.  Which adds an unique touch to their appearance.

The Lacy Game Dog Registry is in the process of tracking down all pure blood Lacy’s in the United States.  We have found that the numbers of Blue Lacy’s are greatly declining.  In an effort to save the breed, we are trying to reach all owners of such dogs.  Current owners provide up-dated information, background and other vital clues to save the breed.  Any names or contacts you might have would be greatly appreciated.  If you are interested in breeding or working quality True Blue Lacy’s please call (210) 681-1301 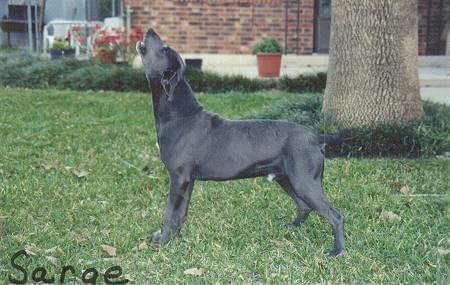 This is SARGE.
Sarge shows a good example of a blue coat Blue Lacy. 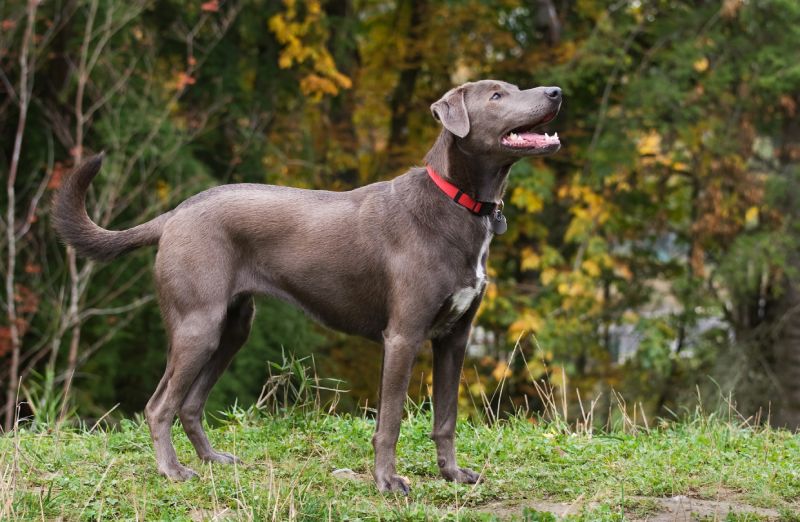